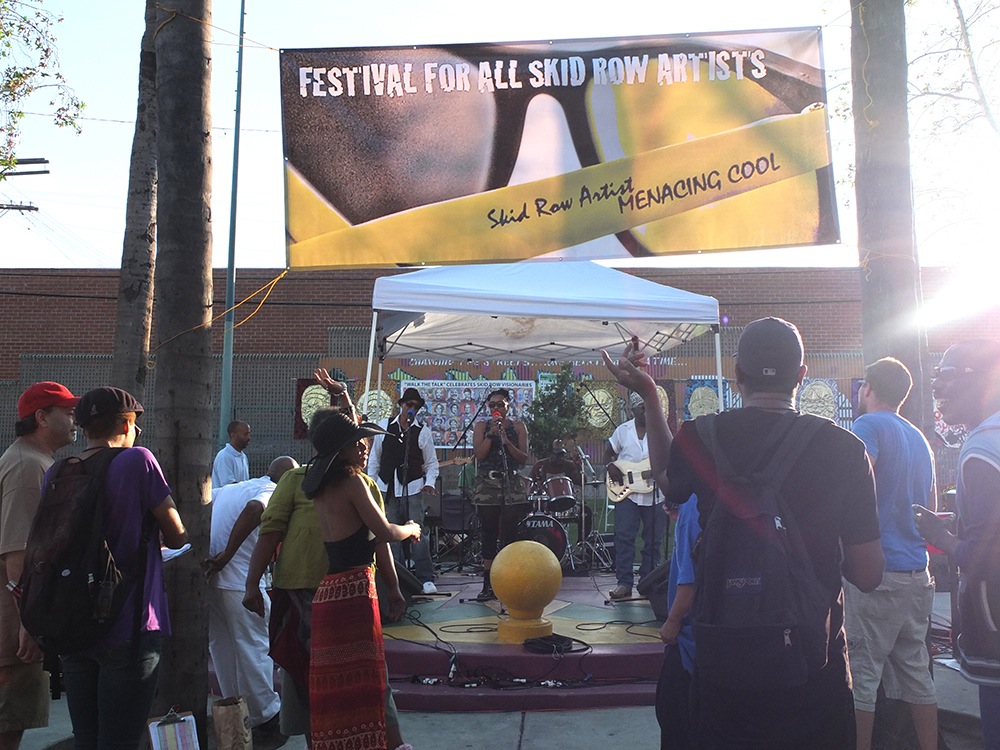 I was stunned by my brief visit to LA’s Skid Row – a neighbourhood that houses the largest concentration of homeless people in the U.S.

Block after block is filled by an electric blue tarpaulin sea, where individual sections are strung up or draped over to form improvised homes. In the heat of the day, these awkward plastic shapes shelter some inhabitants against the merciless sun, while others crowd the concrete in lines, finding shade under buildings or lying in dappled shadows cast by the Californian sycamore trees. 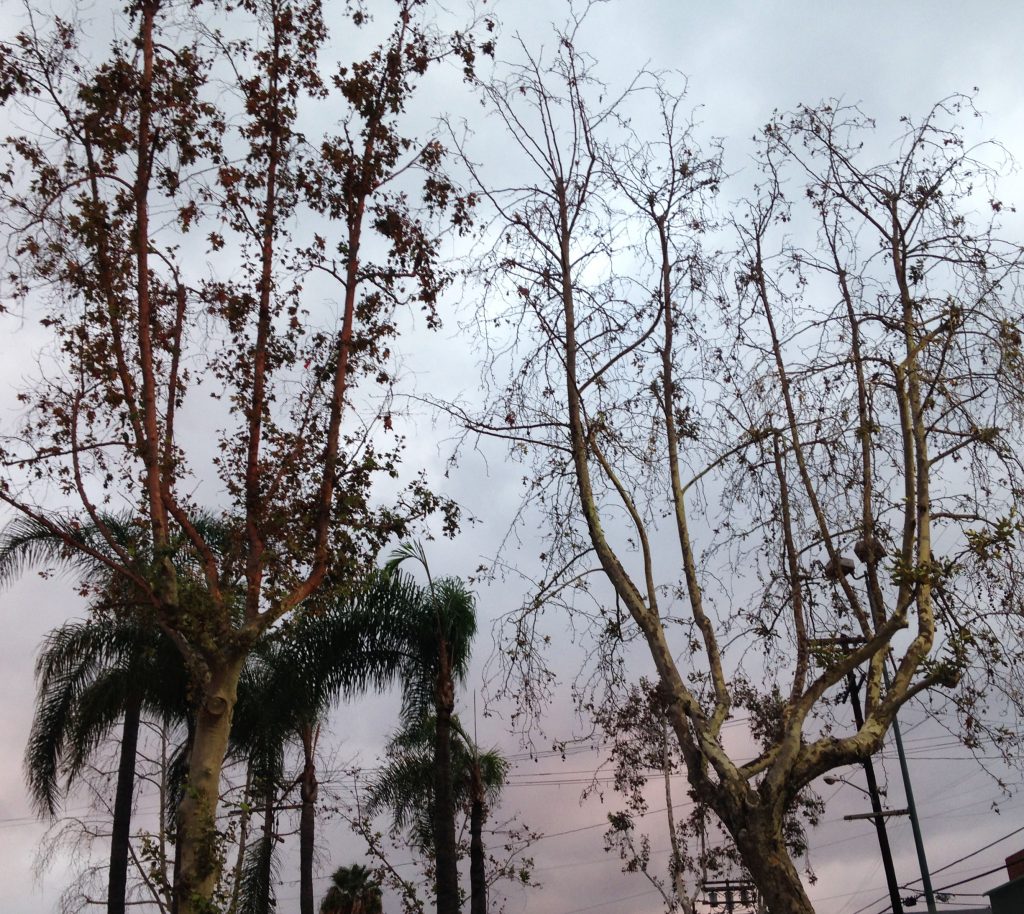 John Malpede, Director of the Los Angeles Poverty Department explained to me that after a 30-year standoff between the homeless community and the police, the Court had recently banned the police from throwing away shelters and possessions of homeless people – something that was still frequently taking place during my visit to Vancouver and San Francisco.

This community is completely isolated from the rest of LA, a city so famous for its glamour and wealth. I genuinely could not believe that I was standing in the same city. And although I was only there for a short time, I was frustrated by recurring attitudes from local residents who frequently referred to homeless people as ‘bums’.

It’s this common cultural attitude towards homelessness that is present within cultures across the globe that dehumanises victims and distances communities from understanding each other and alienates the problem of poverty.

“I am just shocked still after 16 years that people can walk by somebody, often it is old people or sick people that sit on the street and they just walk by. I think…they don’t know what to do about it, they don’t feel like they are part of a society that cares about it, so they simply don’t care and they don’t allow themselves to care because then they would have to do something or ask questions to themselves.”
– Interview with Henriette Bowers, LAPD Associate Director and Producer

Skid Row was created by a disastrous city planning policy that aimed to ‘contain’ the poorest citizens out of the way of the rest of the city.

Now the neighbourhood is home to a thriving community of residents and support services. Other than being the largest concentration of homeless people in the US, the residents here – many tackling mental health issues, substance abuse and trauma describe Skid Row as the largest recovery community in the US.

“When we talk about Skid Row, a lot of times we call it the biggest recovery community anywhere because it has the most AA meetings per square mile anywhere.”
– LAPD Performer and Line Producer, Austin Hines

Although most LA residents attempt to ignore Skid Row, the neighbourhood has been in the sights of developers for some time, who desire to rename the area Central City East.

“The neighbourhood has been in jeopardy for such a long time because it’s in the centre of Los Angeles…and a good bazillions of dollars could be made if only the poor people and the services that support them could be bulldozed…in some form or another”
– Interview with  John Malpede, LAPD Director

In response to the increasing pressure from developers, the Skid Row community, led by prominent public figure and activist General Jeff (who for the last ten years has dedicated his career to improving the neighbourhood’s notorious reputation), is currently fighting for the neighbourhood to be officially recognised. One of his main plans to give the community a voice is by establishing an independent council that could represent them within the city.

“ We need our voices at the table”
– General Jeff

Part of the mission of activists and initiatives working in Skid Row is to change the way residents and outsiders perceive the neighbourhood. So six years ago, two cultural organisations working in the area – the Los Angeles Poverty Department (LAPD) and Lamp Arts, founded the Festival For All Skid Row Artists.

The idea was to create an annual platform that could bring together and highlight hidden and often neglected talents in the area. The event is a progressive platform that enables artists to share ideas, experiment with work and in turn bring people together for something positive. 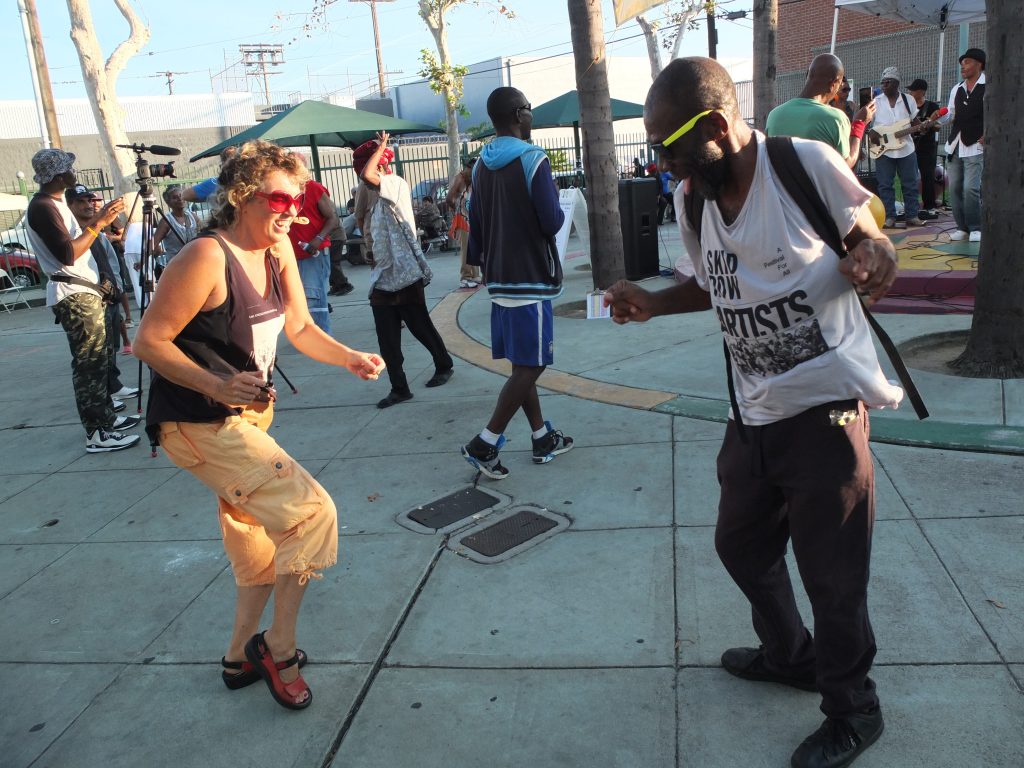 Dancing at the Festival For All Skid Row Artists

“For the students especially it’s a huge experience because they are scared to come to Skid Row…and once they are there and they experience what it’s like and how nice it is they totally change their idea on what Skid Row is and that really happens to everybody who comes to Skid Row from outside Skid Row.”
– Interview with Henriette Bowers, LAPD Associate Director and Producer 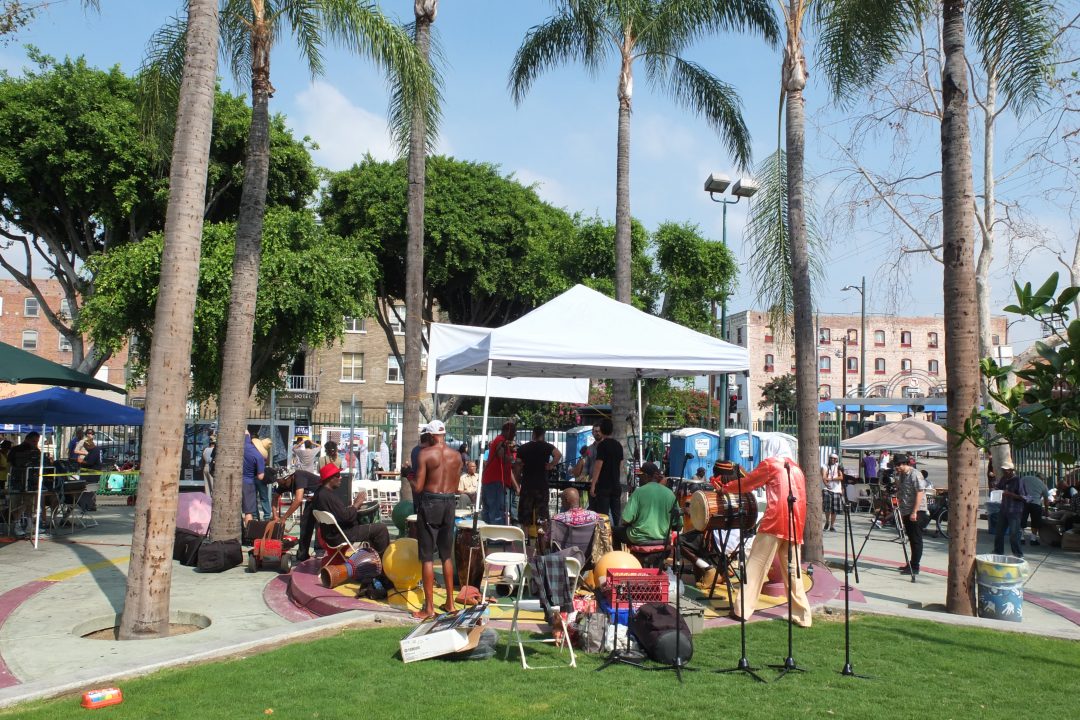 I arrived at the 6th annual festival on another blazing hot Californian day in October. A lively crowd had already gathered outside Glady’s Park, although I soon realised many were not there for the festival but for lunch at the popular soup kitchen next door.

The noisy bustle of Skid Row formed an electric backdrop to the weekend; locals watched through the fence, strolled in for a dance, played basketball at the nearby court, gathered with friends or simply came for a lie down on a park bench. 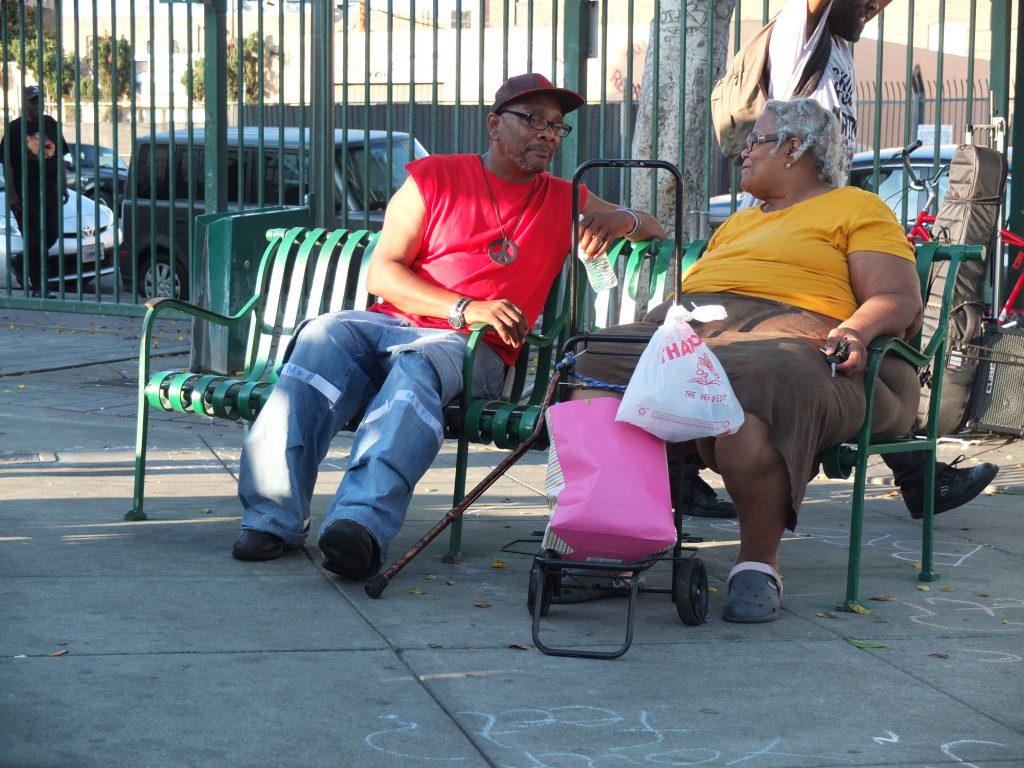 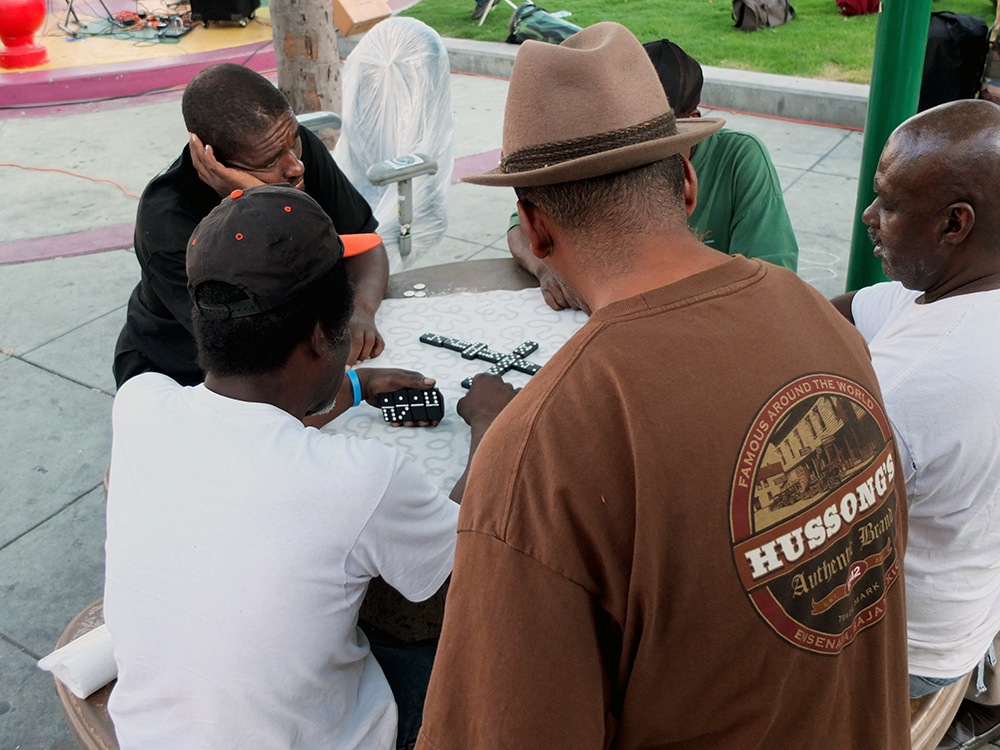 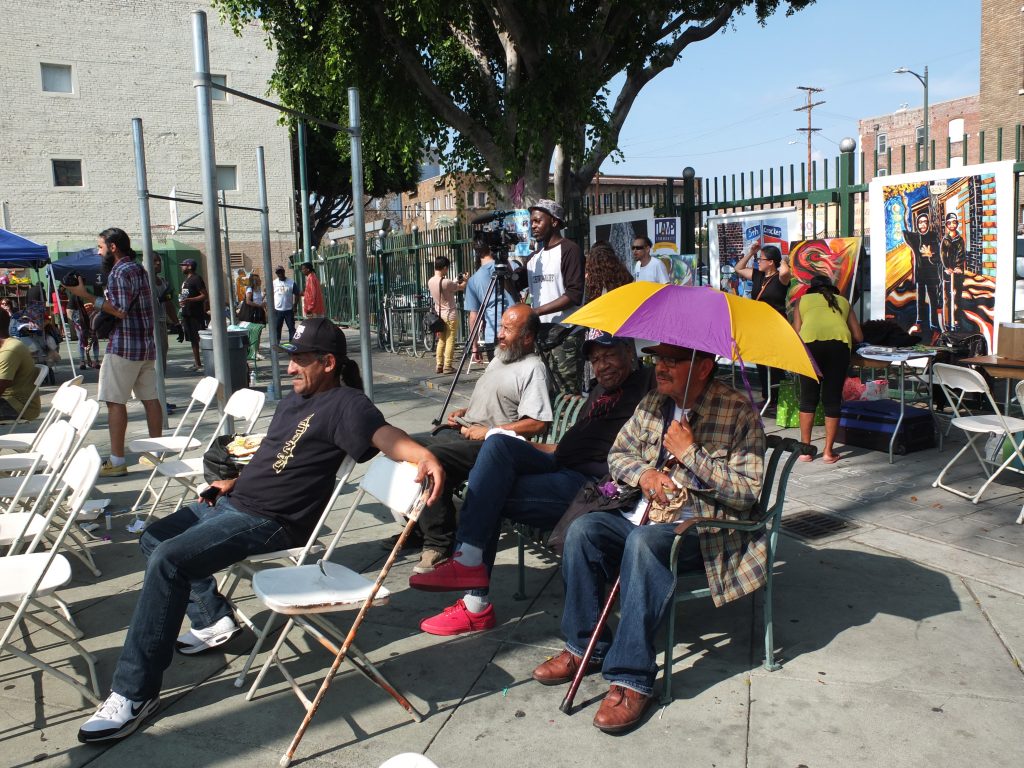 “The buzz is really out on Skid Row”
– Henriette Bowers, LAPD Associate Director and Producer

The soul of this festival lies in the intimacy and spontaneity of the performances – one moment you’re listening to political poetry, the next you find yourself screaming for joy at the festival’s infamous Joe Clark performing as Michael Jackson. This eclectic mix of artists creates what LAPD Director John Malpede calls “a beautiful stew of people living on Skid Row”. 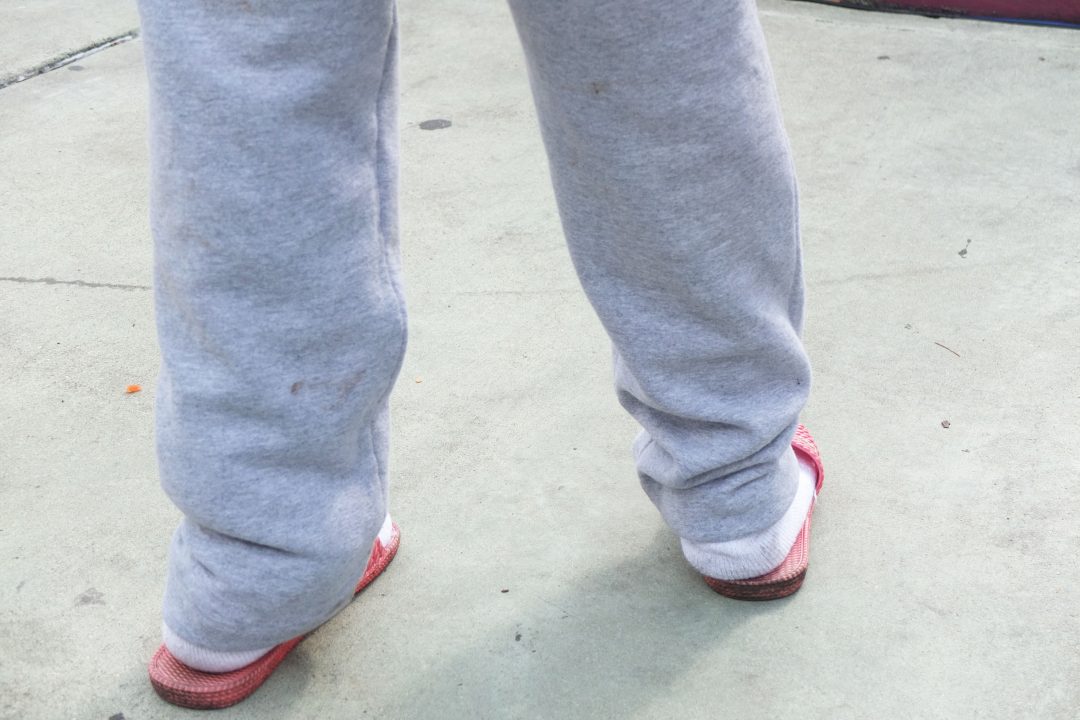 “We know it’s going to be a chaos”
– Henriette Bowers, LAPD Associate Director and Producer 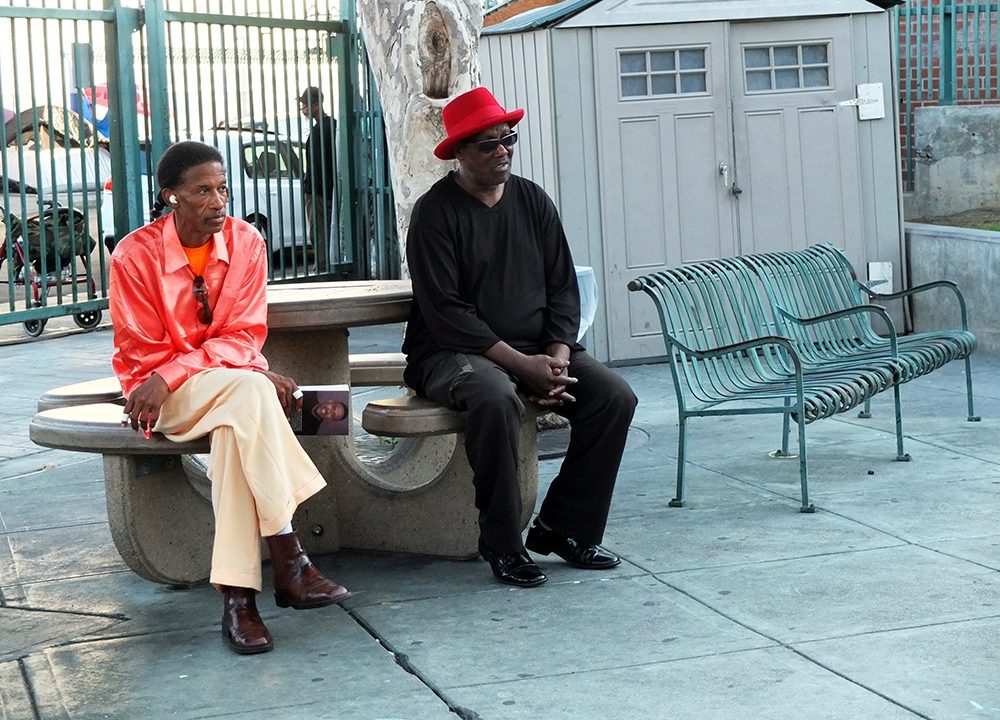 Although some acts prepare for months leading up to the festival, it’s essentially an open mic event where performers are encouraged to sign up and perform on the day.

And it’s exactly this informality that enables the festival to provide an accessible and valuable voice for a community and its artists. 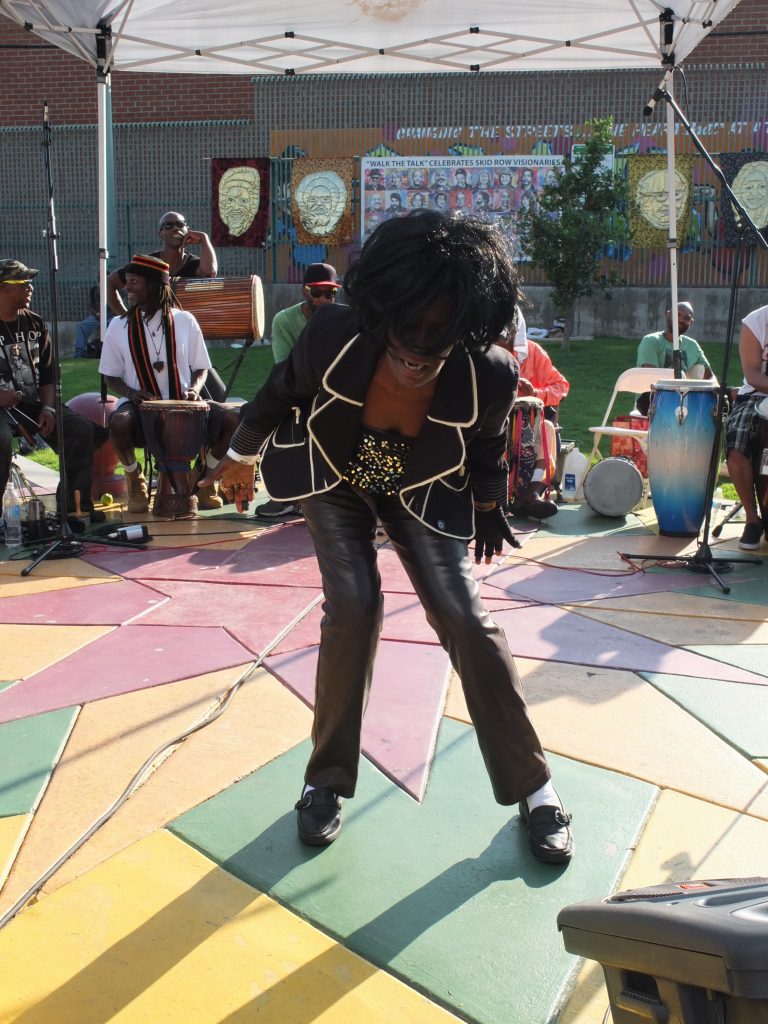 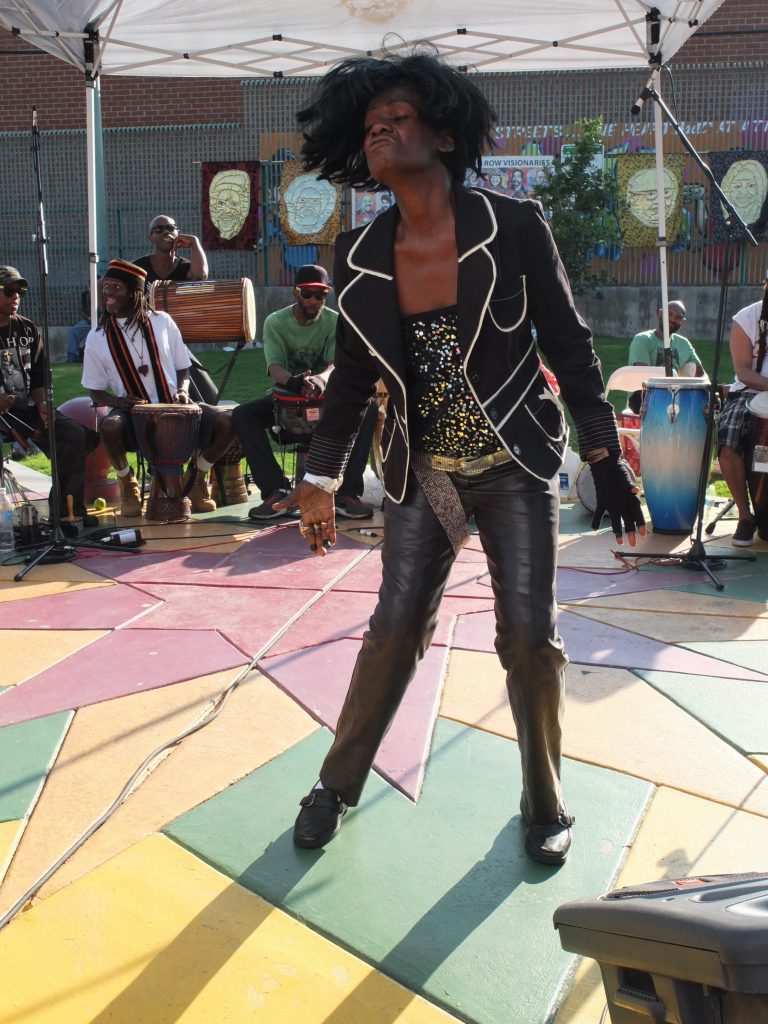 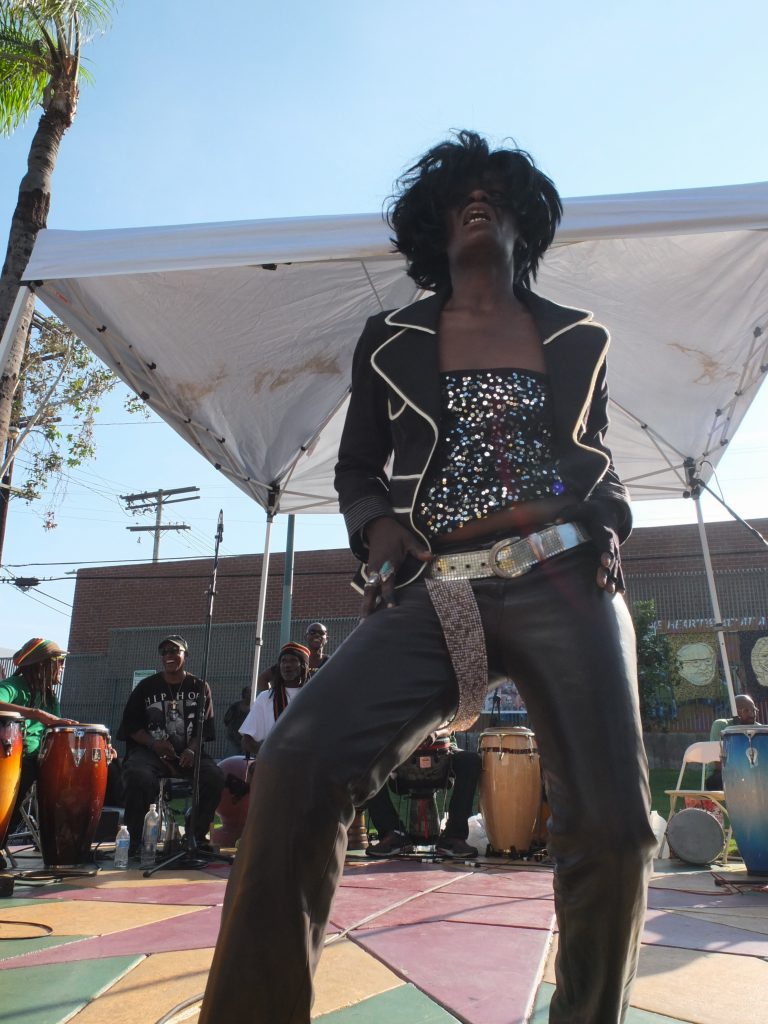 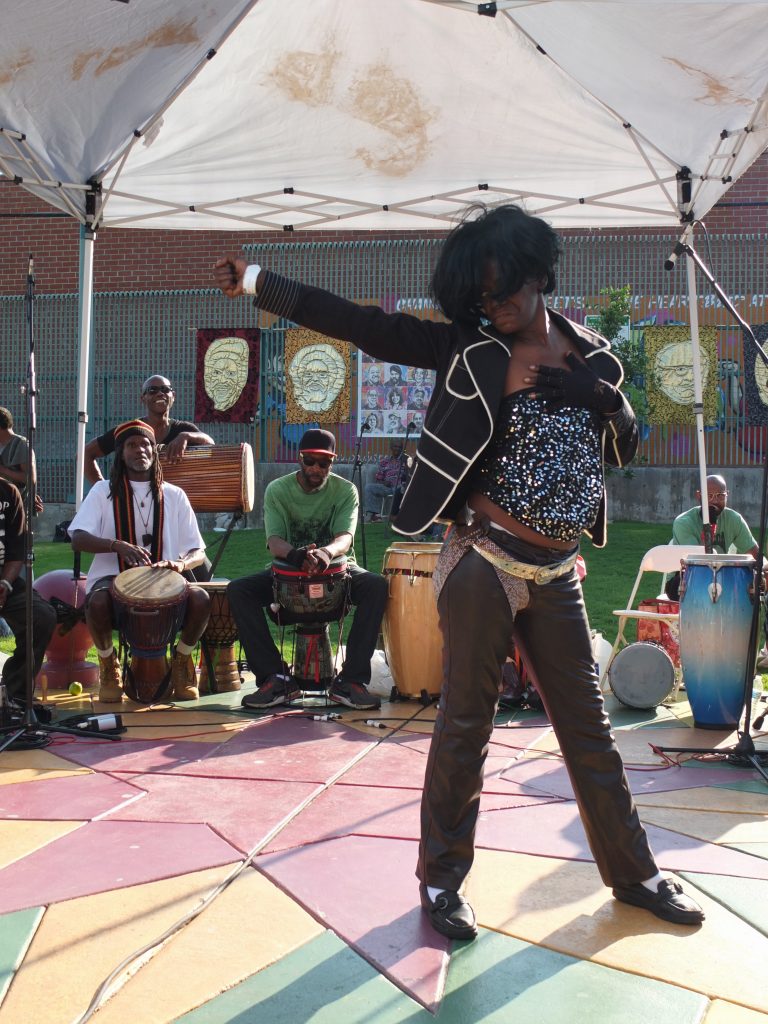 The entire weekend felt highly charged with emotion and I felt that for a community that often struggles to be heard, it was clear that people felt ownership over the open space and were inspired by an opportunity to celebrate and come together.

For some artists, the festival has quite rightly become a highly anticipated event on the cultural calendar. Henriette Bowers, LAPD Associate Director and Producer tells me how one artist who struggled with addiction, Frank, performed a simple song on guitar at the inaugural event but was “impossible” to talk to afterwards because he was so “wild”. Yet he continued to come back, bringing with him the following year a gospel choir. Now six years on and clean, Frank and his band are headlining this year’s festival. 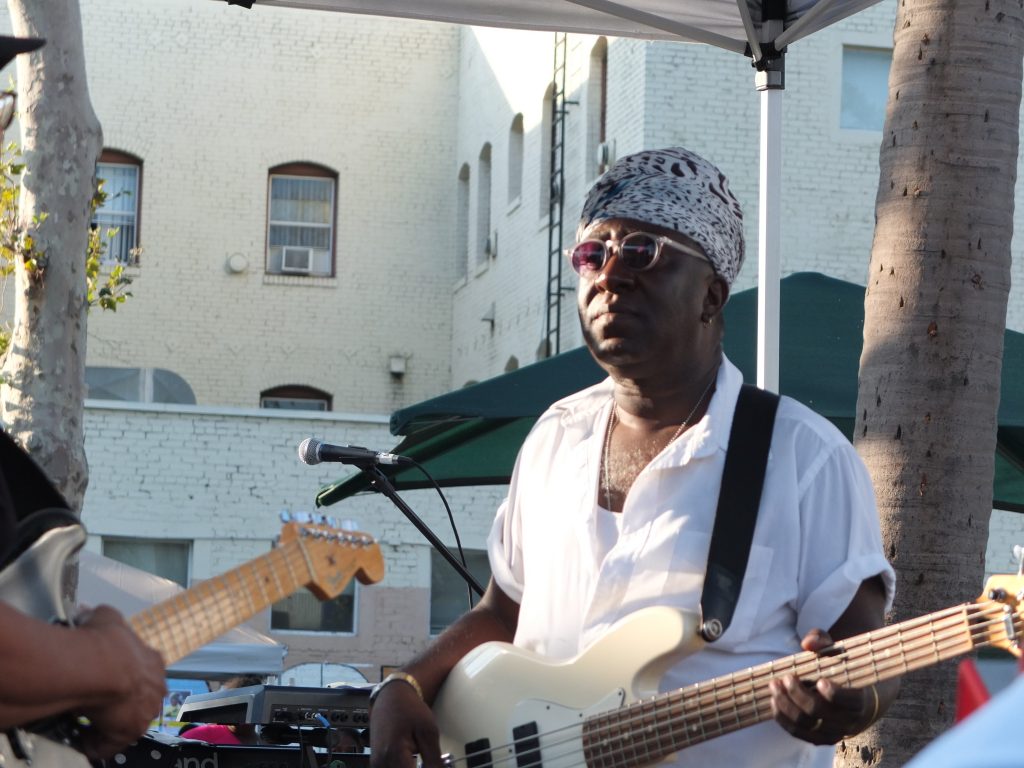 Frank performing with his band 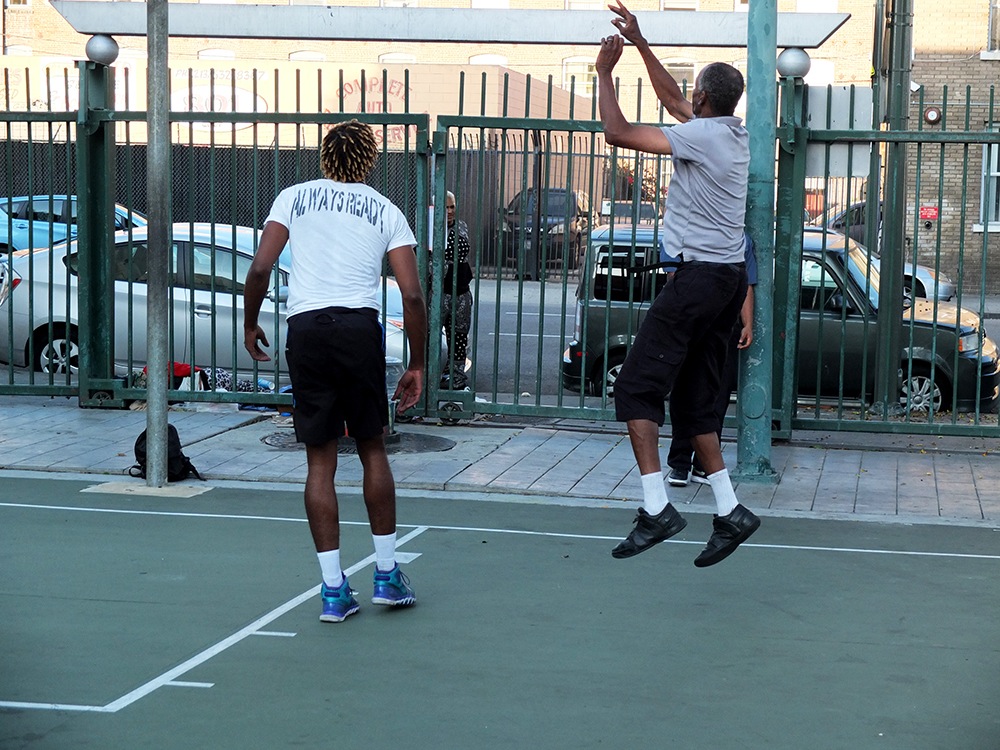 Having a platform to share was evidently an empowering tool for some artists such as Suzette Shaw, who read a powerful poem about the recent police killing of a close friend and neighbour Charly Leundeu Keunang who was shot while unarmed and suffering from mental health problems. Shaw’s performance of ‘Can’t Kill Africa’ was an opportunity to raise awareness and show strength towards the rapidly growing Black Lives Matter movement in this community. 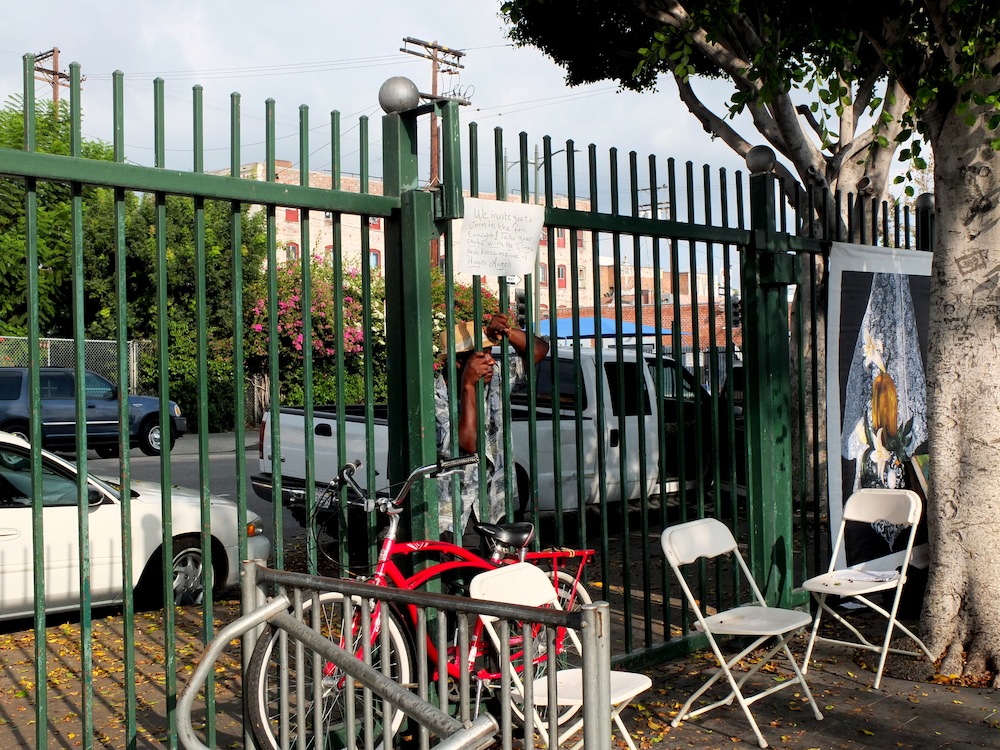 “So many people in Skid Row have so much respect for their community that they are willing to speak up…and say, ‘hey please don’t do that here’, and they know how to deal with it in a way that’s not aggressive and that’s not intimidating or making people feel uneasy.”
– LAPD Performer and Line Producer, Austin Hines

Aware of the intense policing culture in the U.S., I was surprised that I only saw two officers drop in briefly over the whole weekend. John Malpede, LAPD Director explains that the team carry out “community security”, where they discourage drinking or drug use – “if you want to do that go somewhere else”. Perhaps this policy is possible because Skid Row is already ghettoised, yet I felt strongly that with more police present the festival might have lost a vital sense of the autonomy that this festival provides artists, encouraging them to experiment, share and collaborate amongst a wider audience. This is something which is incredibly valuable for any artist and community to be part of.