The Skid Row History Museum and Archive is a pop-up project ran by the Los Angeles Poverty Department (LAPD). It is located in a neglected 80’s brick shopping centre on the crowded Broadway St in Downtown LA. 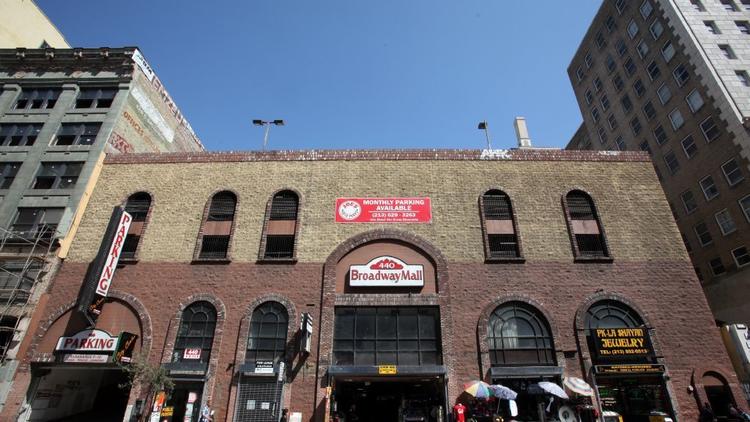 Shopping centre where the Skid Row History Museum is located in 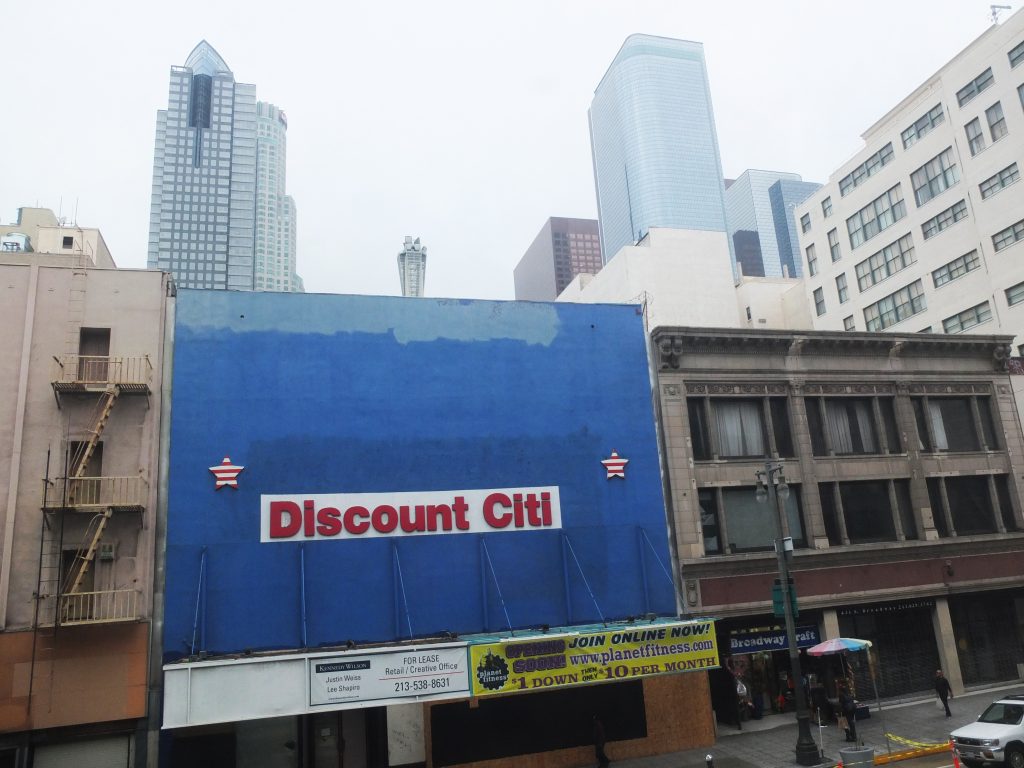 View onto Broadway St from inside the museum

“This is a really vibrant street but there’s a movement to revitalise Broadway, which really means to upscale it…and so we thought that we wanted to do our civic duty and be part of this revitalisation by putting The Skid Row History Museum and Archive on Broadway.”
– Interview with John Malpede, LAPD Director and Performer

The aim of the project is to document the history and current issues surrounding LA’s Skid Row, an area that has had the largest concentration of homeless people in the U.S for many years.

On a stiflingly hot afternoon in October, I went down to the museum space to interview the LAPD team and learn more about why this new project is an important step for the organisation.

For those unfamiliar with LA, Broadway St stands out as being far more lively and animated than many of the other sanitised, ‘fashionable’ areas of the city. The jewellery and electronic shops which dominate the area are crammed tightly together. Owners spend most of their days outside their shop fronts; calling and cajoling passers-by to come in and check out their wares or simply sitting on chairs that they’ve brought out to the street to enjoy the midday sun and observe the goings on.

I couldn’t initially work out how to get into the museum, which is tucked upstairs between a parking lot and a half vacant shopping mall. After getting lost in the defaced stairway to the car park, I noticed a modest sign that directed me to an empty mezzanine that overlooked the mall. Here I found a few of the core LAPD team who were meeting in the museum space in preparation for The Festival For All Skid Row Artists. 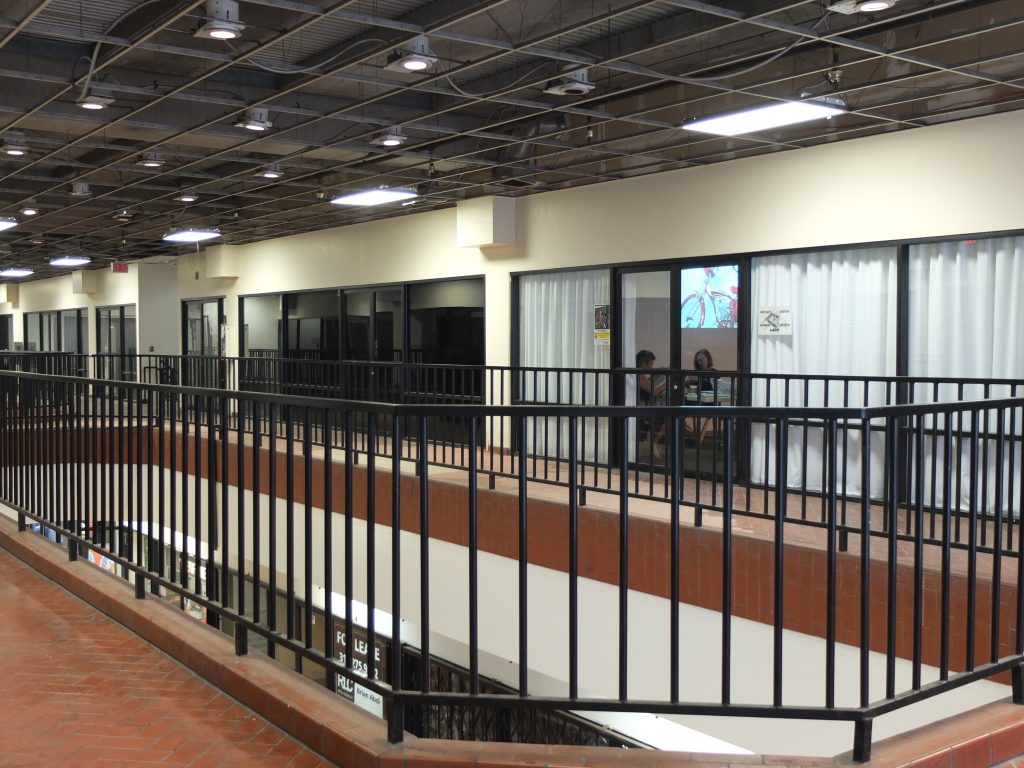 I sat down in the half finished Archive space to begin my interview with LAPD Director and Performer, John Malpede who was chomping on a crispy apple between his words as we chatted. Malpede has a relaxed, good-humoured manner about him, which made the interview feel more like a casual chat with a familiar college professor.

During our conversation, it was clear that Malpede was passionate about the development of the museum and he lit up as he described this exciting new way of working for himself and the organisation. Until now, the organisation had existed without a space of their own, happily relying on borrowing friends’ spaces to work and rehearse in.

The move towards establishing a more permanent project space reflects the LAPD’s recent research into the lack of cultural spaces and resources available for people living and working on Skid Row.

Carried out by Malpede’s team in partnership with local artist and designer Jeff Cain from USC Roski School of Art and Design, this intensive research project looked at the resources available for artists working and living in Skid Row. The project highlighted the lack of cultural spaces for artists to access in the area and came up with proposals that could be beneficial for the creative community, such as: (i) a mobile ‘art truck’ that could be used as a rehearsal space and travel to other communities to present work and collaborate with other projects; or (ii) utilising existing spaces that are often closed off to non-members via a sharing system so that a wider range of creatives in Skid Row could access them. 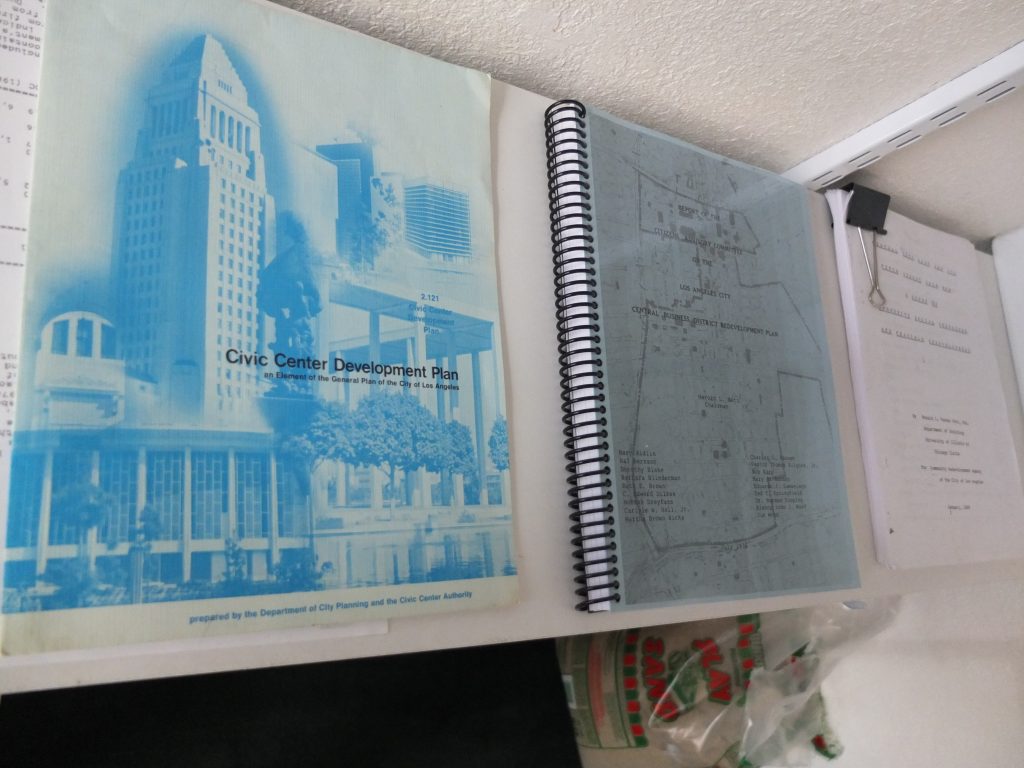 The LAPD have occupied two modest sized rooms in the building – one for the developing Archive and the other for exhibitions and events. The humble décor is far from a traditional sterile ‘white cube’ gallery space, instead replaced with dark green carpet and net curtains. The setting is comfortable, animated and provides a wholly refreshing atmosphere that actually adds to the exhibited work.

One of the aims of the growing library Archive is to collect significant historical papers that reveal critical decisions made by the local government to push out the city’s poorest residents, which eventually formed Skid Row. Malpede invited me to delve into official documents, stories and interviews that piece together the story of how the Skid Row neighbourhood was formed.

“The purpose of the museum is to focus largely on the activist initiatives coming out of Skid Row that have been successful and have preserved the neighbourhood and also show the kind of creative thinking that is necessary to not only preserve Skid Row but also all the other neighbourhoods that are under intense economic pressures.”
– Interview with John Malpede, LAPD Director and Performer

By creating an accessible place where these documents are available, the LAPD have created an opportunity for residents in the city to learn about significant and often overlooked policies that have seriously affected Los Angeles’ cultural, social and political relationship with homelessness.

The museum is not tied to large institutions and funders, and this offers an alternative platform for residents in the city to share, debate and explore significant ideas and issues with the freedom to be critical and political.

These City documents were also the source of inspiration for a recent exhibition at the museum – Blue Book Silver Book, by Robert M. Ochshorn, curated in collaboration with the LAPD. This experimental exhibition invited visitors to interact with the archive material. Visitors were encouraged to turn the pages of two books – the Blue Book and Silver Book, which were placed simply on a table in the space. As the pages turned, projections appeared on the gallery walls, picking out significant text, photos, audio and film that pieced together a collage of the history of Skid Row.

“As you turned the page, everything would change in the room.”
– Interview with John Malpede, LAPD Director and Performer

The LAPD are keen to ensure that the museum will also be a place for a wider network of people outside of Skid Row to engage socially and culturally. As the threat of gentrification intensifies, steps have been taken to highlight the important links between Skid Row and other neighbourhoods in the City that are facing similar disruption and displacement at the hands of developers.

“A lot of the time when you go to a planning meeting with the City about something that we think is negatively impacting Skid Row the other side will be represented by a developer and his PR consultant and a handful of people, who will then speak on behalf of their tenants, but actually their tenants’ interest is completely unaligned with their own interests. And so we support elevating the tenants voice because I think in doing so there will be a lot of commonalities with what people are trying to do in Skid Row and those other neighbourhoods.”
– Interview with John Malpede, LAPD Director and Performer

The museum hosts a diverse range of events in the space, including community meetings, film screenings and experimental exhibitions. On my visit, the museum was presenting a collection of fantastic handmade bikes made by prominent Downtown activist, General Dogan. 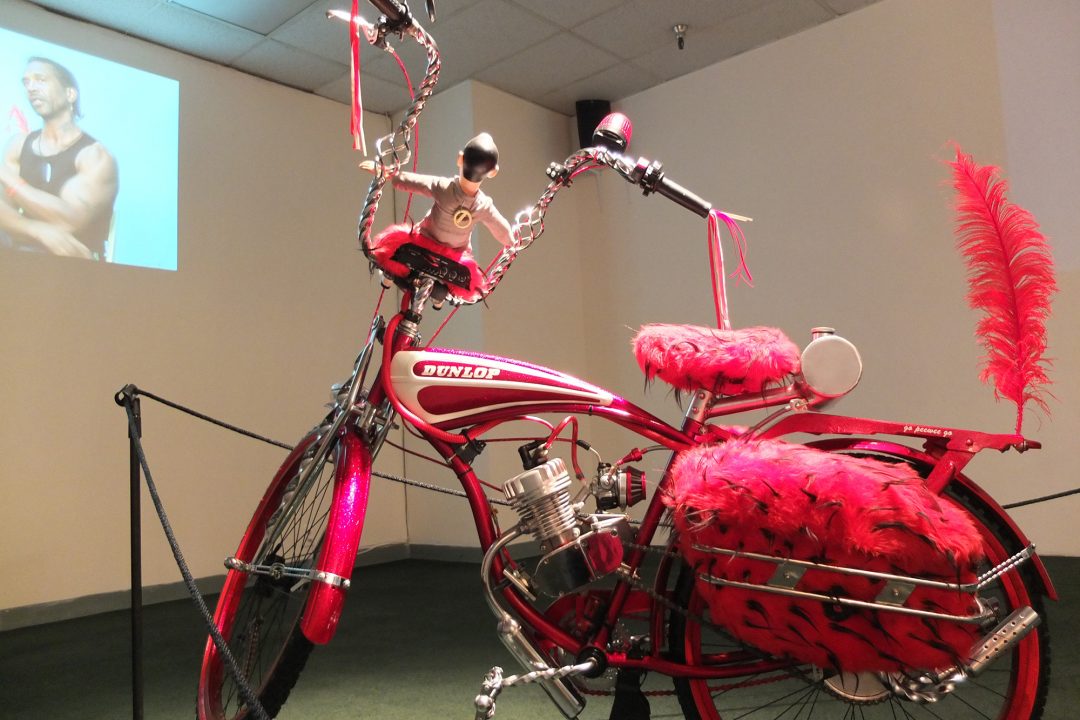 “the first iteration of The Skid Row History Museum sort of looked at policy, things that were going on right then around homelessness and also in one of the gallery spaces we did a bunch of things that had been conceived as protest actions but worked really well as art actions”
– Interview with John Malpede, LAPD Director and Performer

The exhibition, Screaming Two Wheelers, included three bikes that were hand crafted by Dogan as symbols to create “positive disruption” against the “oppressive forces” that L.A.’s homeless face. Dogan, a longstanding Skid Row inhabitant and community “champion” initially aimed for the bikes to attract attention as he rode through the streets, “working with residents to foster cultural resistance in the face of aggressive policing strategies in a city where he continually witnessed and experienced the criminalization of homelessness.”

Perhaps playing on traditional gallery aesthetics, the outrageous bikes, bursting with feathers, faux fur and throbbing colour were exhibited behind ropes. Their character reminded me of dragons, powerful and vivid against the original, dark green shopping centre carpet. And with the blaring hum of busy Downtown in the background, it felt like the bikes could at any minute start up on their own and ride straight out of the building onto bustling Broadway St. 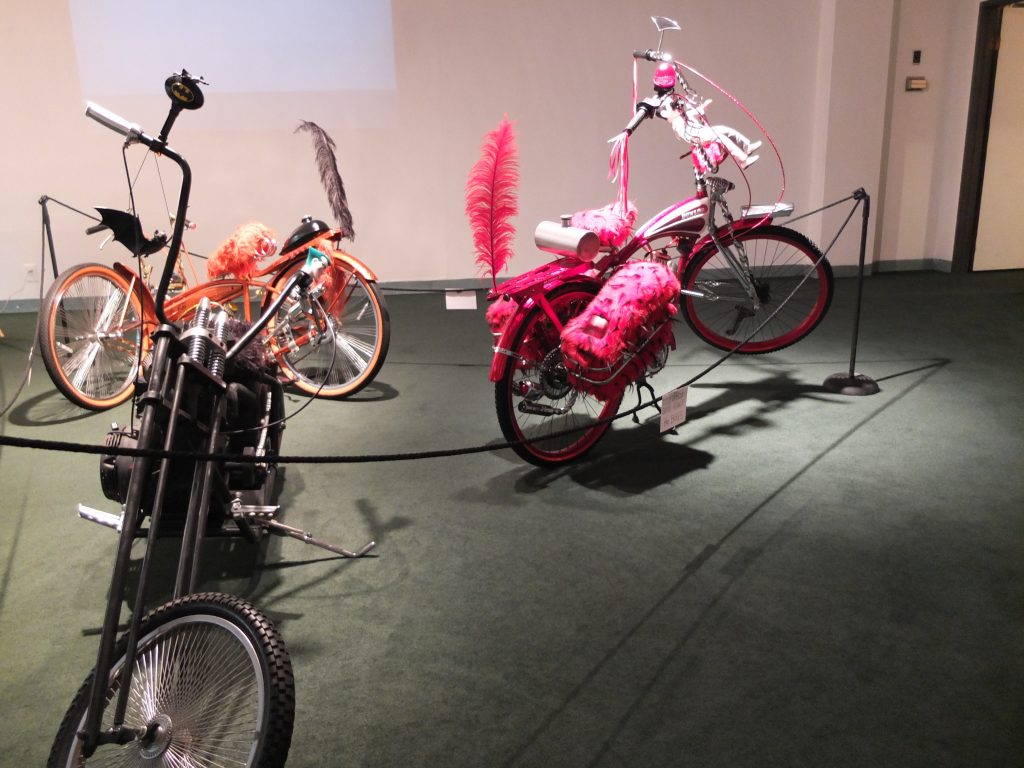 The exhibition reveals the LAPD’s interest in working with “objects that pull double duty as activist tools”. In the past they have also worked with similar pieces that included a Catholic Worker shopping cart and David Busch’s Free Speech tent.

For me, the LAPD’s experimental attitude towards curating exhibitions perhaps stems from the organisation’s openness to flexibility within different working methods. Their approach is to find the appropriate medium, be it theatre, performance or art for what and how they want to say it. 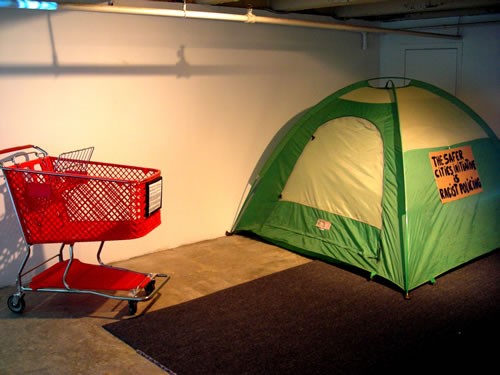 “I think fluidity among genres is really a big part of what makes an art scene vital…I think I’ve always been engaged with people who are sort of in an intersection of all these different realms.”
– Interview with John Malpede, LAPD Director and Performer

I also observed this relaxed attitude that fosters experimentation in the LAPD’s attitude towards programming The Festival For All Skid Row Artists. So for me, it seems key that the LAPD’s success has come from this air of spontaneity and immediacy when responding to material.

In turn, the LAPD have created a radical museum that encourages its community to be inventive with ideas and sources, challenging preconceived ideas about what an educational space could be and so creating a welcoming and open atmosphere that one feels truly comfortable to spend time exploring.

Read the next article here: Funding