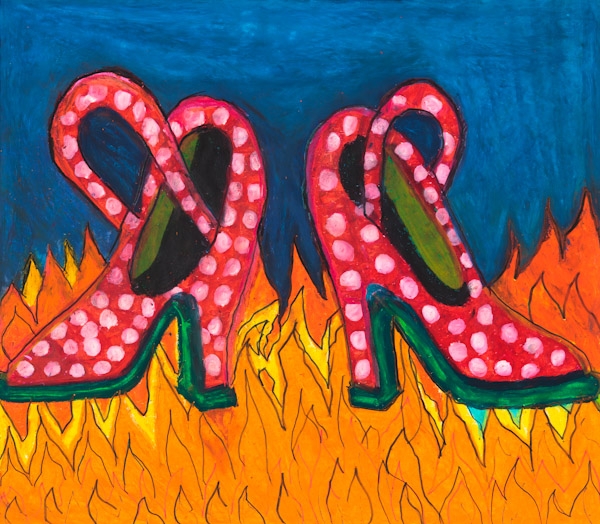 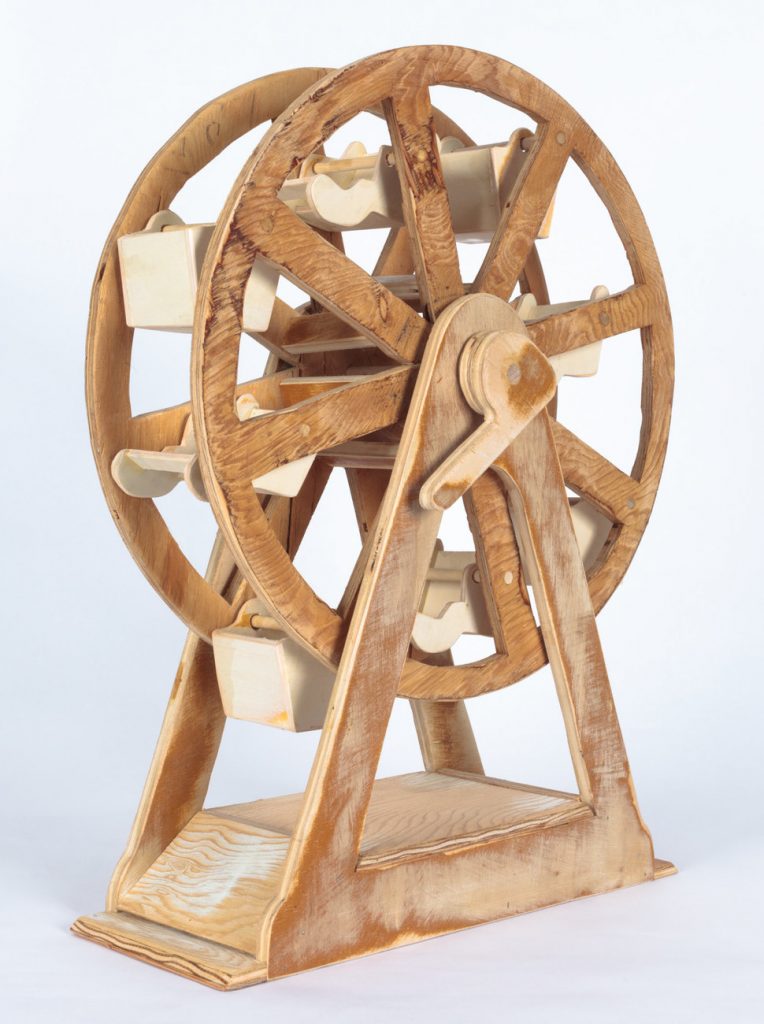 “I just won’t obsess”, says Camille Holvoet while sketching out the lines for a new drawing of a Ferris wheel, “you are the obsessive queen” replies Gilles Combet, who goes on to tell Holvoet that, “if you start obsessing again – I’ll chop your head off”. 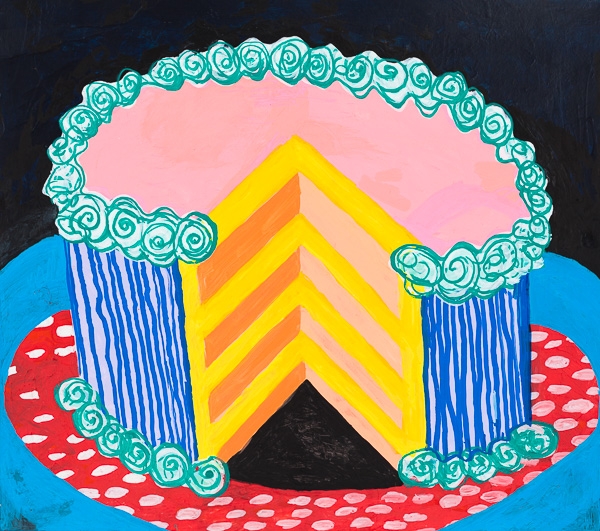 Holvoet comes to the Creativity Explored studio five days a week and I’m told by Combet that she “only lives because she can draw”. During her time at Creativity Explored and previously its sister organisation, Creative Growth, Holvoet has developed a unique style that has led to her being selected as one of five to represent the organisation at last year’s Outsider Art Fair in New York.

I discovered that many visitors to Creativity Explored had also become interested in her life and work, with the Huffington Post and brutforce.com running articles on her last year. 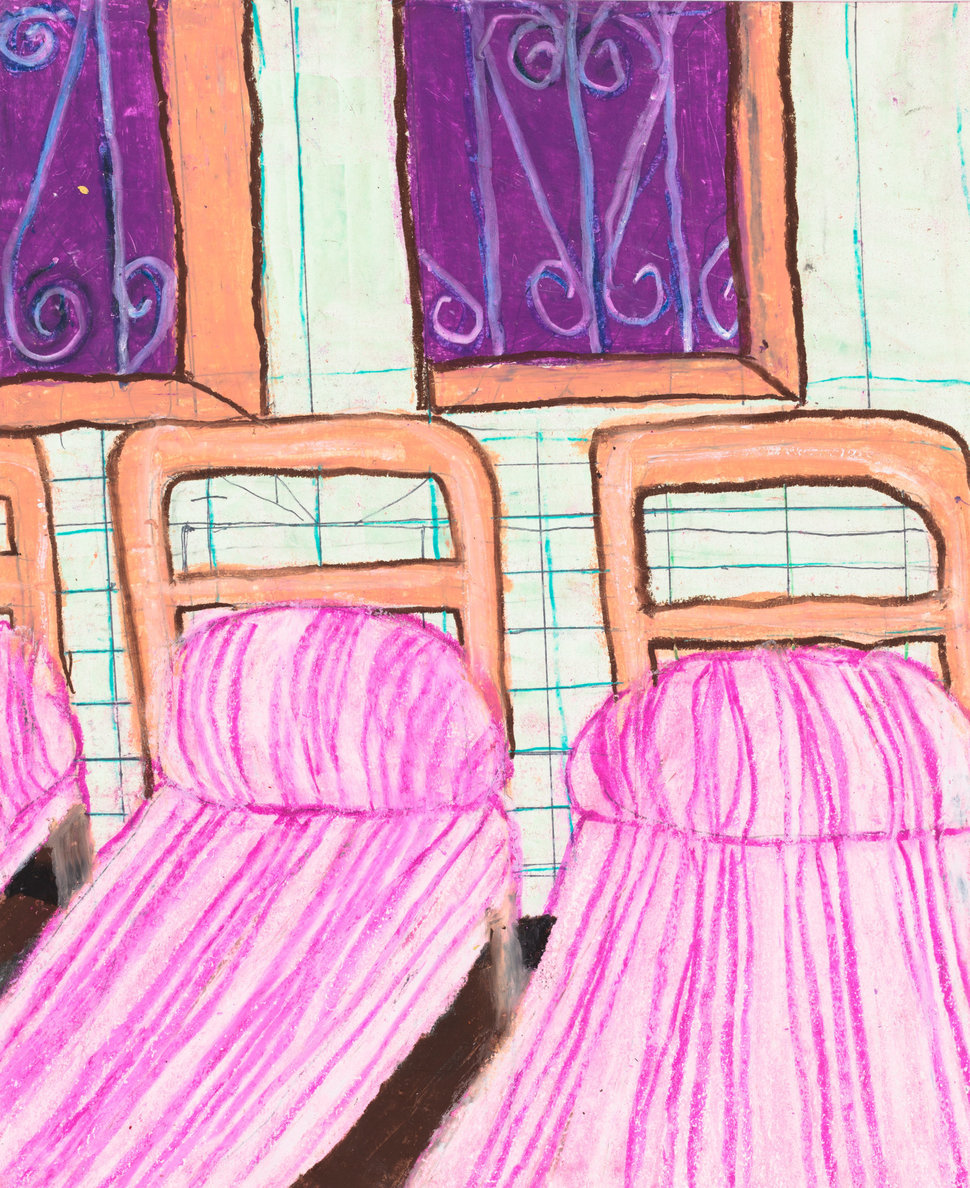 Over the time I spent at Creativity Explored, I too became close to Holvoet. I was initially seduced by her confident drawings that are highly charged with sensation. Subsequently after meeting the artist behind the work, I soon became immersed within the tumult of Holvoet’s swirling thoughts and questions. 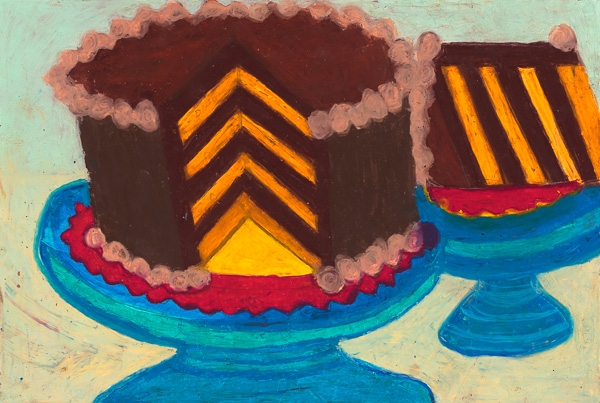 Holvoet’s drawings often revisit the same themes over and over: Ferris wheels, carousels, ice cream, cakes, family and friends. Her drawings encrust the page with thick oil pastels, rubbed in block colours to create ice cream, wheels, friends and family or theatrical cakes – all drawn with a perfectly cut slice taken out, which feels almost as if Holvoet has eaten a slice for herself while making the drawing. Perhaps reflecting a kind of satisfaction that Holvoet seems to get from making work. Just like eating the perfect slice of cake, Holvoet is satisfying a craving while she draws. 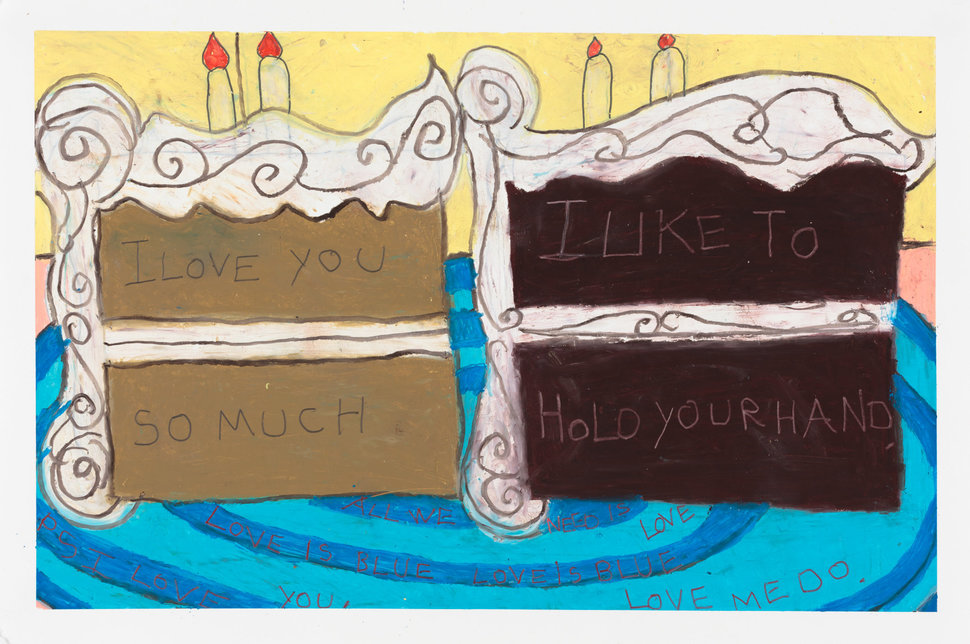 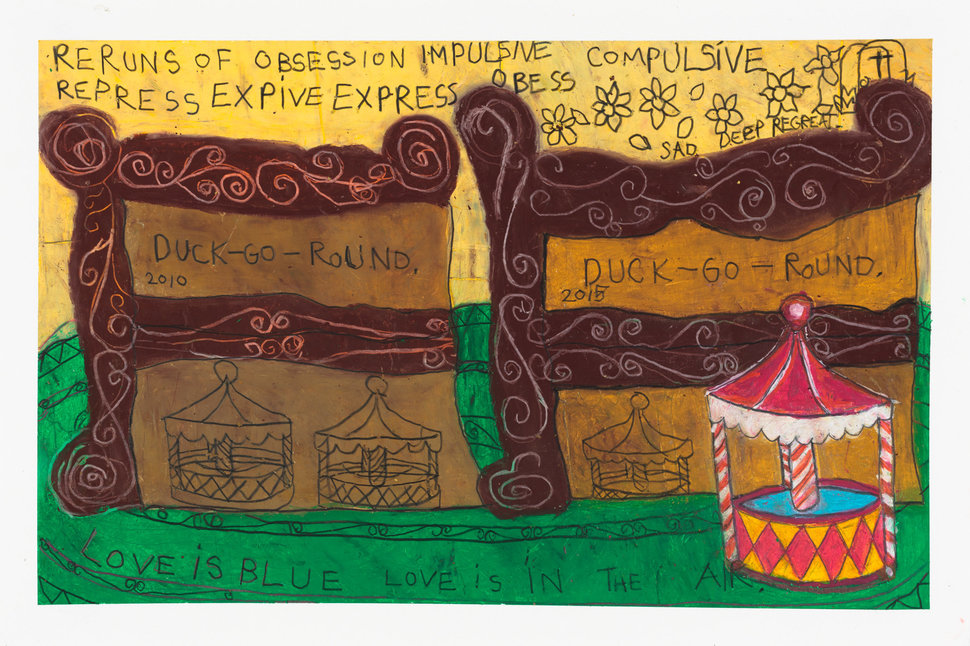 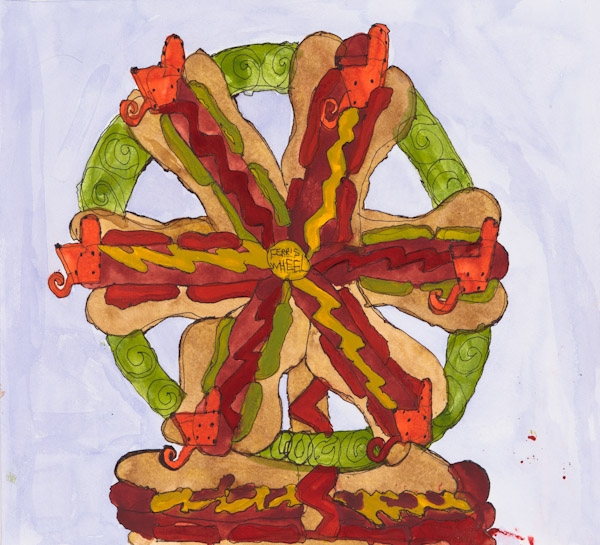 “Her artwork is fascinating, it’s completely full of repression and hunger for life and is very generous and it has everything that is sort of way bigger than life. She is basically way bigger than life in all her needs and her desire, her fears, anxieties and so forth.”
– Gilles Combet, Visual Arts Instructor at Creativity Explored

Creativity Explored Executive Director Amy Taub tells me that it is impossible to truly understand Holvoet’s work without considering how Holvoet’s past experience in institutions has affected her, “I can’t even imagine what it must be like to…have nothing, no personal possessions, no freedom of expression, nothing.” Taub goes on to describe how Holvoet’s art, “expresses what’s been forbidden – what she can’t have, what she would like to have. It’s the world of what she would like and what she can’t have, the desire versus the forbidden.” And that’s why Taub is glad that “she’s here and how we’re able to help her deal with some significant trauma in her life.”

Whenever she’s painting a Ferris wheel, she’s revisiting the Ferris wheel over and over again and every time she’s just alive, she’s basically going into conversations with herself and her memories and her own reality and she’s putting it out there and she can look at it, act on it, be active upon looking at it – she has this whole conversation going on and it’s very conceptual in a way.”
– Gilles Combet, Visual Arts Instructor at Creativity Explored

As I sit with Holvoet working in the studio, I feel that as she draws it’s almost as if these shapes are her signature. I see her entering a sort of meditative state as she revisits these structures over and over. Her hand moving fast – just like her mind as she sketches and rubs the lines, forming a visual dialogue to communicate her inner most wanted desires to the outside world.

Holvoet definitely enjoys having an audience to talk to. After a couple of weeks sitting at Holvoet’s studio space, I noticed that she would disappear every lunch break, arriving just in time to get back to work, often with bags full of odd bits and bobs that she found in local ‘thrift stores’, bought with the intention to build a Ferris wheel or a carousel back at her home.

After learning about these trips, I asked if I could accompany her on the daily expeditions and soon we started to arrange lunch dates where we would march arm in arm or “hot dogs” as Holvoet would call them through the bustling Mission neighbourhood in San Francisco. 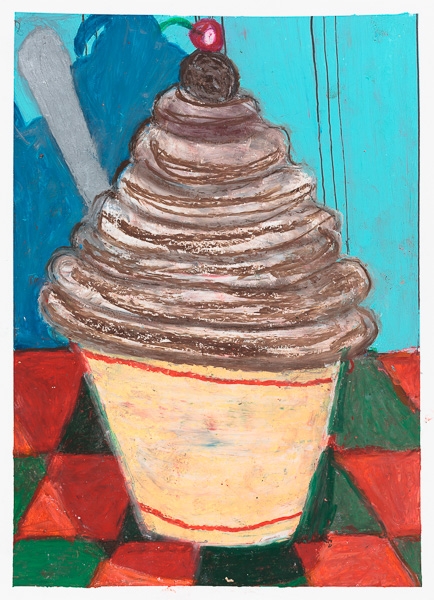 As we walked we would discuss the things that preoccupied Holvoet that day – distinct memories, “I got the wrong drink. I decided the wrong drink that time on birthdays for Joanna’s birthday”. She would often get me answering baffling questions like, “fried squid, is it spicy? What is it? What is squid? Is it like headcheese?” or perhaps our biggest topic – convincing me to treat her, “I want you to get me a little something – it would be nice…I like getting gifts – letters and gifts, not business letters like social security – no I don’t like those kind.” 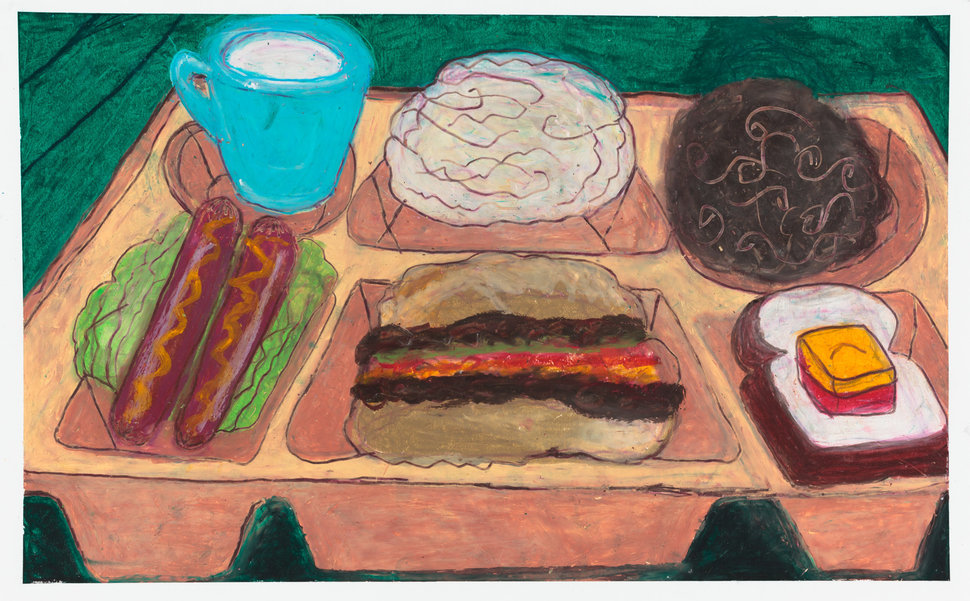 I looked forward to our lunchtime meetings. On warm autumn afternoons I would ‘treat’ her to an ice cream – one of Holvoet’s favourite desserts and a common inspiration for some of her drawings. We would sit in the sun and I would try to unravel some of her questions, getting tangled myself trying to describe the meaning of things, like “what is an echo?”

After a couple of weeks, I asked Holvoet if she would mind if I started to record our conversations. I had become engrossed in our friendship and wanted to document the artist outside the studio. I hoped to gain a clearer insight into what motivates Holvoet and the impact that coming to Creativity Explored had on her life. 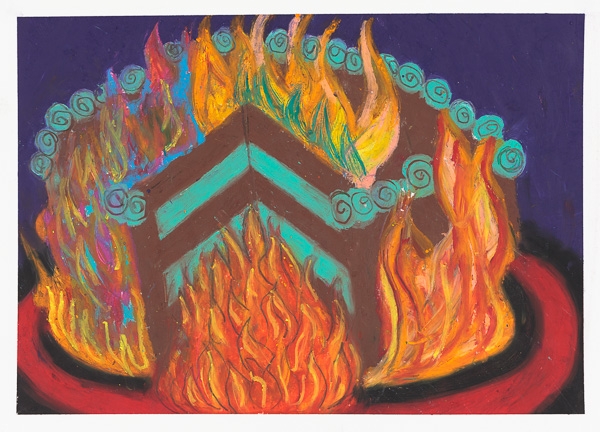 Yet Holvoet rarely wanted to talk about her artwork – unless it was about making money from selling a piece, (something which has impacted many artists working at Creativity Explored, due to directed attention towards marketing in recent years, which had led to increased sales.)

Instead, what was striking about spending time with Holvoet was listening to her openly talk through exactly what she was thinking and feeling in that moment, often weighing up her emotions and questions out loud, “I want it” she would say, then “Do we need that? Do we need it?”

At times I felt frustrated for Holvoet who seemed tired by these frenzied thoughts, “my mind is going back to being a little kid again, I need medicine for it, I need a pain killer for emotion, an emotion killer.” 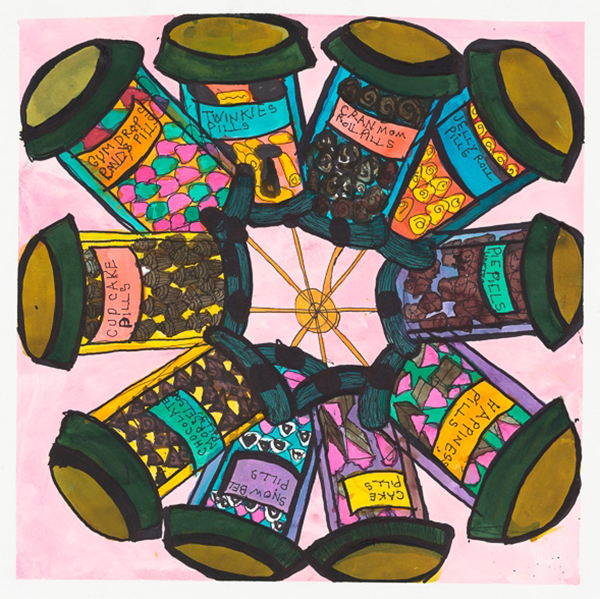 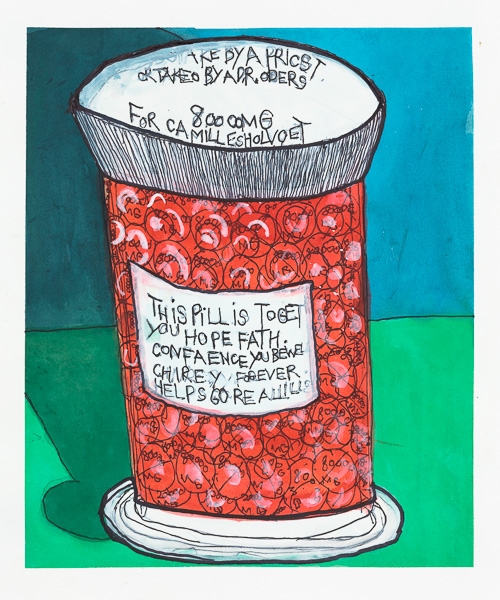 'To get you hope fath' by Camille Holvoet. Ink, marker on wood. Image courtesy of Creativity Explored

‘Anti-breaking things pills, this is what I need’ by Camille Holvoet

What makes me break my things?

This is what I don’t understand,

Sometimes it doesn’t make any sense,

I want a stronger solution,

I want to talk about it every second,

Until everyone turns away from me,

Combet tells me that Holvoet has a “capacity to survive” and it’s evident that coming to Creativity Explored and being part of a community that has encouraged her to “let it all hang out” as Taub puts it, has allowed her to do so.